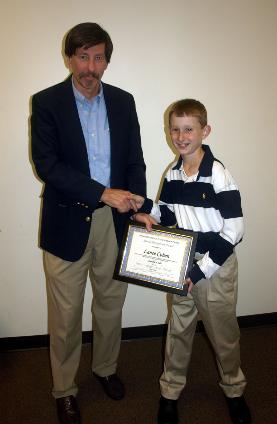 This year the largest individual contributor to the New Rochelle Campership Fund was a young man who is 12 years old. Lance Cohen –
a 7th Grade student at Albert Leonard Middle School – chose to raise money for The New Rochelle Campership Fund as his Bar Mitzvah
project for Beth El Synagogue.  Over the last 9 years, Lance has enjoyed going to various summer camps himself.  Now, he decided that
he wanted to give other local children – those who come from financially needy homes – the same opportunity from which he has benefited. Lance started by studying about how the Campership Fund operates and who it supports. He read through the organization’s web site (www.campership.org)  and literature, and learned that donations go straight to helping needy children.  Lance then kicked off his own donation campaign with his immediate family.  The next phase was to solicit help from relatives and friends, and once that was done, he initiated a door to door campaign in the neighborhood.  Lance then came up with the idea of writing to the children’s camps where he previously spent his summers.  Camps in New York, New Jersey and Pennsylvania all sent in contributions, supporting his endeavor.  After a five month effort, Lance found he had collected $1,608 in donations, funds that will allow the Campership Fund to provide the experience and joy of attending summer camp programs to 10 more children in financial need.  But, his endeavor is not over yet…Lance is still pursuing other donation opportunities between now and Summer 2010, and has also committed to his own personal donation after his Bar Mitzvah.
The New Rochelle Campership fund is the only not-for-profit organization in our community that exists solely to support sending children of financially needy families to summer camp. Since 1957 it has help 21,831 children enjoy the summer of their lives.  As it is comprised of an all volunteer board, virtually 100% of every donation goes toward this goal.  Lance Cohen is setting a true example of commitment.  If you would like to help Lance and the children in our community, please send a contribution to:
The New Rochelle Campership Fund Inc.
P.O. Box 255
New Rochelle, NY 10804
Any amount helps, every child counts.